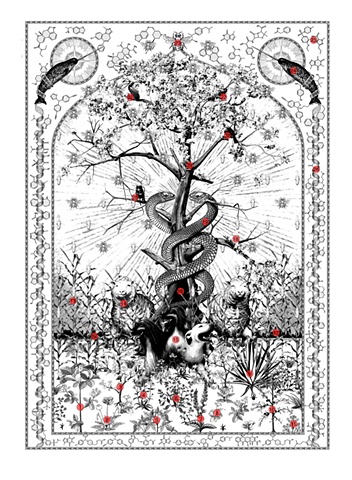 Key to Allegory of the Monoceros
< previous

1. Cinchona is a tree whose bark contains quinine, an anti-fever agent useful in treating malaria and a host of other ailments. It was made an official element in the British Pharmacopoeia in 1677. Cinchona was valuable to Europeans in expanding access to colonies. Gathering bark involved destroying expanses of trees, often exploiting indigenous workers. Quinine bark was also known as “Jesuit’s Powder” because of its use by the Jesuits very early in its history and due to the influence of the Company of Jesus.

2. Opium poppy, Papaver somniferum, is used for making morphine and codeine and, though often abused, is on the World Health Organization’s list of essential drugs as they are the most effective way of relieving severe pain. The opium poppy is also used to make heroin and opium.

3. The Ginkgo Biloba is a unique species of tree with no close living relatives that has been cultivated by Chinese monks for centuries. It has many alleged nootropic properties, and is mainly used as memory and concentration enhancer, and anti-vertigo agent. It may also improve blood flow

4. Echinacea, or Purple Cone Flower, is widely believed to stimulate the immune system. “Echinacea was one of the basic antimicrobial herbs of eclectic medicine from the mid 19th century through the early 20th century, and its use was documented for snakebite, anthrax and for relief of pain.”wikipedia

5. Ginseng is used to reduce the harmful effects of stress, as an aphrodisiac, and as a stimulant. It is a popular additive to energy drinks.

6. Atropa Belladonna, also commonly known as deadly nightshade, is derived from the Italian meaning “Beautiful Woman” and was used by women to dilate their pupils, an effect that was considered enhancing to beauty. Prolonged usage was associated with vision loss. It has been used in traditional treatments for centuries for an assortment of conditions including headache, menstrual symptoms, peptic ulcer disease, histaminic reaction, inflammation, and motion sickness.

7. Foxglove – digitalis The common garden ornamental plant, foxglove, contains cardiac glycosides, which can treat or cause heart conditions. It is one of the most commonly prescribed antiarrhythmic agents for heart failure. At one point it was used as a treatment for epilepsy, but its usefulness in this capacity was disproven. Digitalis, when used inappropriately or by a person with a healthy heart, can be poisonous earning it such names as “Dead Man’s Bells”, and “Witches’ Gloves”.

8. Arnica is a flowering herb used for strains, sprains, and bruises. It contains vasodilators and acts as an anti-inflammatory agent.

9. Agave is used medicinally to treat constipation and excessive gas. It is also taken to relieve arthritic joints and to create the artists’ favorite drink—tequila.

10. Juniper is a spice used in a wide variety of culinary dishes and best known for the primary flavoring in gin. When combined with tonic (infused with Quinine from the Cinchona plant) the favorite colonial drink—gin and tonic—is created which served to increase colonists’ resistance to malaria and help them to expand their dominance.

11. Saint John’s Wort, or hypericum perforatum, has a long use as an herbal treatment for depression. It was traditionally also used to ward off evil. Earth

13. Corn is the most widely grown crop in America. It is used in almost every aspect of food production from high fructose sweeteners to feed for almost every domesticated and farmed animal.

14. Dolly the sheep was born in 1996, the only surving clone out of 277 attempts, making her the first cloned mammal. She had 6 lambs, the first one named Bonnie, before dying of a common lung ailment at half her expected lifetime.

15. Cerberus is the three headed hound said to guard the gates of the underworld. Our Cerberus is a fusion of Snuppy, the first cloned dog, with his genetic parent and his birth mother. Snuppy, an Afghan Hound, was carried to term in 2005 by a Labrador Retriever.

16. Tree of Life—the branch structure of the tree represented in the center of the tapestry is based on Darwin’s first sketch of his evolutionary theory, which he titled the “Tree of Life.”

The tree of life is also a biblical reference to the Garden of Eden. “The Tree of Life is an important symbol in nearly every culture. With its branches reaching into the sky, and roots deep in the earth, it dwells in three worlds and is seen as uniting heaven, the earth, and the underworld. “ The tree of life is often a deciduous tree with its leafless winter state representing death and its leafy, fruiting spring state representing life, rebirth and procreation. In many religious mythologies a serpent or dragon lives in the roots of the tree as a guardian. The Tree of Life Web Project (ToL) is a collaborative effort of biologists from around the world.

18. The Vacanti Mouse is a mouse that had a human ear shape grown onto its back in a lab in 1997. The ear was grown by seeding cow cartilage into a biodegradable ear shaped mold and then implanting that cartilage structure into the mouse. The mouse was a genetic mutant commonly used in lab settings due to its inhibited immune response, which makes it less likely to reject transplants.

19. Caduceus is the wand of Hermes, messenger of the gods, guide of the dead, and protector of merchants, gamblers, liars and thieves. It’s made of 2 serpents wrapped into a double helix, sometimes with wings, and is used as a symbol for medicine due to confusion with the rod of Asclepius, god of medicine and healing, which has one serpent and no wings. The snakes in the tapestry also represent the common mythological serpents that live in or coil around a tree of life in a divine garden. 20. Black #6 Mouse is the most commonly used research mouse.

21. The Golden Toad, once abundant in small area of Costa Rica, has not been seen since 1989 and is classified as extinct--possibly one of first extinctions due to global warming,. The sudden disappearance of the golden toad was a harbinger for the current state of amphibians in the world. The causes of its disappearance are still disputed.

22. GMO Corn - genetically modified corn has had specific changes introduced into its DNA by genetic engineering techniques. Corn is the most widely grown crop in America. It is used in almost every aspect of food production from high fructose sweeteners to feed for almost every domesticated and farmed animal. 23. Birds of Paradise evolved in New Guinea, a land with abundant food but no mammalian predators. This unique evolutionary situation led to complex courtship choreographies, involving extravagant visual and aural displays, since mating rituals became the primary diversifier in whether a specific bird’s genes were carried forward. The Bird of Paradise is used here as a representation of the extreme cases of Natural Selection. 24. Honey Bees are a cornerstone of agriculture and naturalized ecology and are integral to pollenization and fruiting of plants. Recently they have been a major cause of concern due to their disappearance for unknown reasons a phenomenon known as colony collapse disorder. Border

25. Narwhal or monodon monoceros, is an aquatic mammal with a hornlike incisor tooth up to 10 feet long. Vikings and other traders once sold their horns as unicorn horns thought to have magic powers such as the negation of poisons. The Narwhal is considered the mammal most vulnerable to the effects of climate change.

26. Molecular Diagrams of some of the 50 most prescribed pharmaceutical drugs. The most commonly prescribed drug is an antidepressant. Mixed with these molecules are the molecules for some popular recreational drugs including coffee, chocolate, cocaine and ecstasy.

27. DNA Spiral—the iconic double helix that is the map for all life forms