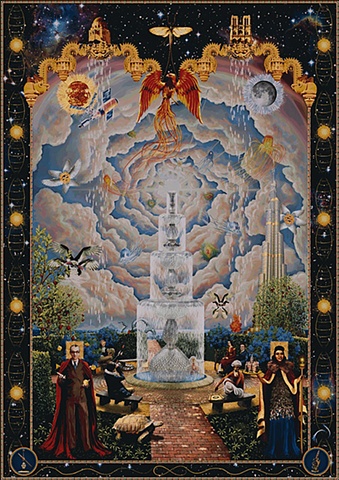 A collaborative tapestry woven through the Magnolia Tapestry Project, designed by Andy Diaz Hope and myself.

“The infinite has a potential existence… There will be no actual infinite.” - Aristotle

Is space infinite? Is time infinite? Is there an immortal soul? For “Allegory of the Infinite Mortal” we created a model tableau representing human contemplation of the infinite. It is not so much about infinity or immortality as it is about the scientific and philosophical structures mankind has used throughout history to explore the concepts of infinity and immortality and our place therein.

A circular garden around a central fountain of youth (modeled on Klaus Weber’s LSD Fountain, 2003) provides a space for a gathering of historical figures who created models of thought that have influenced the way we think about the infinite. Gardens are spaces of both man and nature – separate from both the city and the untamed jungle and created for contemplation and elevation of the soul. A mixture of philosophers, mathematicians, and others populate this garden, from Brahmagupta, the first century mathematician credited with giving us the number zero, to our saint of immaculate immortality, Henrietta Lacks, who died of cancer in the 1950s, but whose biopsied cells became the first immortal human cell line, not only surviving to this day, but saving countless lives through the medical research they allowed.

Beyond the safety of the garden lies the vastness of an endless sea populated by monsters of the unknown void. Burj Khalifa, the tallest building in the world as of 2010, rises from the sea like the Tower of Babel into a sky filled with angels, some in the form of biologically immortal jellyfish and human heLa cells. Referencing both the holographic principle and celestial depictions of divinity, the angels and light flood out a tunnel in the heavens. A rain of binary code falls across the sky from a demon’s open mouth as his jaws return all created things back into undifferentiated matter. As part of an archway framing the sky and inspired by early Jain and Hindu thinking about the infinite, the demon also represents K i r t t i m u k h a, devourer of time and symbol of life feeding upon itself for survival. Atop the arches and against the starry void beyond the sky sit an observatory and a church, representing the two paths mankind tends to take in his exploration of the infinite. In his search to expand limits of knowledge, mankind examines the smallest elements and the farthest reaches of his world. Both science and religion turn to allegory to represent what we cannot see for ourselves.